KRCL Presents: Lady Wray at The State Room on March 26 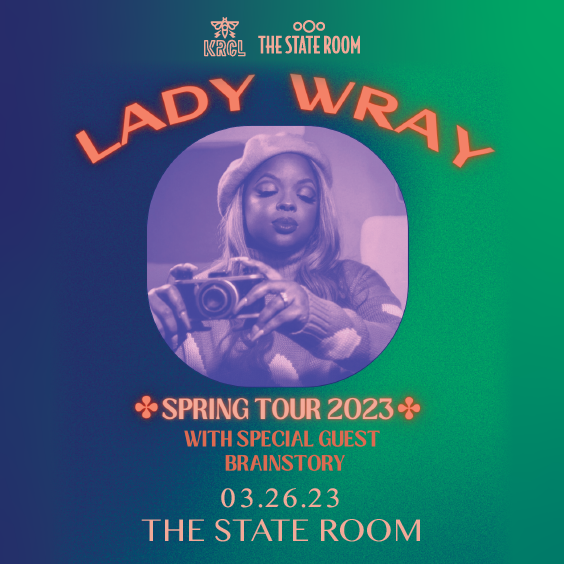 Back in January of 2020 Lady Wray released one of our favorite albums of the year, Piece of Me. Now, she's headed to The State Room on Sunday, March 26.

"Like most artists, Nicole Wray's life in music has always reflected her real life. As a fifteen-year-old in Virginia, she auditioned for Missy Elliot in her mother's home. Even then, with her voice so full and arresting—Missy signed her on the spot. Later, in 1998, merely two years after that tryout, she had a debut solo album and a single that smashed up radio and TV, quickly going gold. But back then—young and unsure—Nicole was essentially following someone else's lead, signing the lyrics they wrote for her and in the way they wanted them sung.

Fast forward to now, after a few fits and starts with other labels and projects, and you'll find a very different Nicole Wray. Today, she's a mother, a wife, and living for herself and her family. So naturally, this evolution followed into her music: she sings how she wants to, expertly writing lyrics for herself and others. To hear her tell it, it's these things—and most importantly, an unflinching self-belief—that help lead a young and raw Virginian singer named Nicole to become Lady Wray.

The latest step for Lady Wray is her new album, released on Brooklyn's Big Crown records. Called Piece of Me, the record is—on the one hand—a continuation, picking up where Lady Wray and label co-owner/producer Leon Michels left off with Queen Alone. But Piece of Me is also a kind of homecoming for Lady Wray. That first record sonically showcased the dexterous range of Lady Wray's voice and songwriting by leaning toward soul and R&B with tinges of hip-hop. On Piece of Me, it's still R&B with a heavy dose of soul, but you'll hear boom-bap-smacked drums and chunky basslines front-and-center, all creating a head-noddingly dense backdrop for Lady Wray to traverse—much like the era in which she was first introduced to us. In some ways, Piece of Me is like a Big-Crown-ification of late 90s R&B—and Lady Wray is right at home."