Events for All Ages

Brigitte Kiss together with QueerMeals and Third Space Studios invite you to celebrate the 2-year anniversary of Glamateur Hour at the KPQ Banquet. Keep Provo Queer! Since February of 2018, Glamateur Hour has provided a great way for the community to come together in support of LGBTQ+ youth. Enjoy dinner provided by QueerMeals, an awards ceremony honoring people nominated by local LGBTQ+ youth, and of course an all-ages drag show featuring the rising class of artists and leaders who are here to Keep Provo Queer.

Propelled by Chris Carrabba’s intimate and emotionally raw lyrics, sweeping acoustics, and his charismatic presence, Dashboard Confessional stands as one of the biggest alternative bands of the 2000s.  Critically acclaimed and embraced by a legion of fans, Dashboard’s brand of alternative rock swept through a generation who embraced their albums and sold out arenas (their last full band tour culminated in selling out NYC’s Madison Square Garden!). “One is reminded of Bob Dylan’s Blood on the Tracks, only stripped down to the bare essentials,” praised PopMatters about their debut The Swiss Army Romance, setting the tone for the band’s massive impact on both their fans and the media alike, including SPIN, Alternative Press, MTV, among many others. 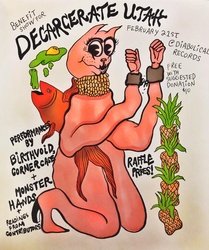 Join us for a night of music and dancing, while helping us raise funds for our second publication! This event is free to attend, but we encourage bringing donations.

Find details about our publication here: https://chuffed.org/project/help-us-publish-decarcerate-utahs-second-issue RSVP at https://www.facebook.com/events/506784296693967/